An earthquake interrupted my slumber early this morning. In my dreams, I was jogging along a winding, foggy forest path with friends, while in reality, a 4.2-magnitude quake was rumbling up to my parents’ house. All of a sudden, I was awake and riding the mechanical bull formerly known as my bed. Cookie barked, and it was over as quickly as it began. Oklahoma already gets hit by tornadoes so this new earthquake phenomenon seems a bit excessive, but I respect mother nature’s occasional reminders that she’s still the boss around here. 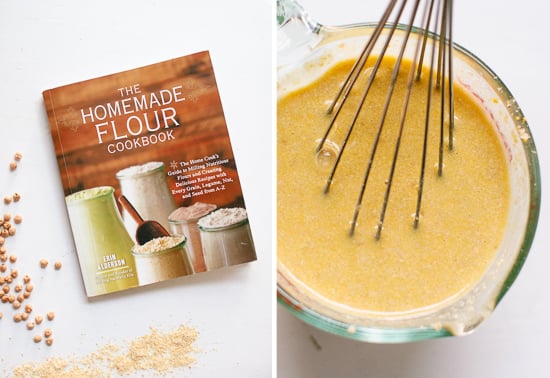 I made this socca pizza the night before before I headed south for an extended weekend. So, what is socca, anyway? Socca is a simple, savory, crispy pancake made with just chickpea flour, water, olive oil and salt. Apparently it’s a popular street food in Nice, France, where they sprinkle it heavily with freshly ground black pepper and serve it with cold glasses of rosé. Let’s go!

The longer socca bakes under the broiler, the crispier the bottom sides and edges become. Crisp socca makes a fine gluten-free pizza crust, with a flavor slightly reminiscent of falafel, and it’s even easier to make than pizza dough. Socca, socca! (Sing it like polka, polka!) 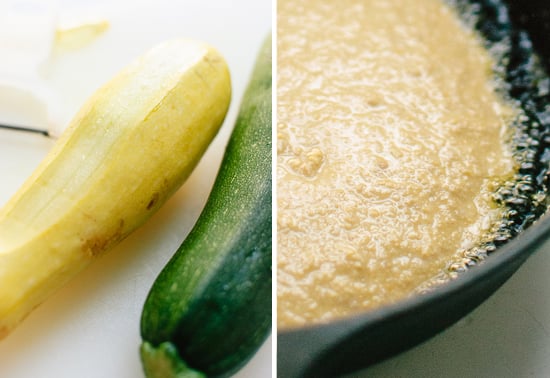 The base socca recipe you see here comes from a new cookbook called The Homemade Flour Cookbook, by Erin Alderson of Naturally Ella. Erin is one of my closest blogging pals—I text her for emergency advice and answer our video chats in my PJs. She’s a very good friend indeed. Naturally, I was super excited when her beautiful book arrived on my doorstep, fresh from the publisher.

In her new cookbook, Erin explains how to turn all kinds of whole grains, legumes, nuts and seeds into homemade flour. Then she presents 100 creative recipes that utilize those homemade flours. She offers everything from zucchini and corn empanadas (made with a spelt crust) to blueberry muffins (made with amaranth flour) to banana cream pie (complete with a raw sunflower crust). Many of the recipes are gluten free. 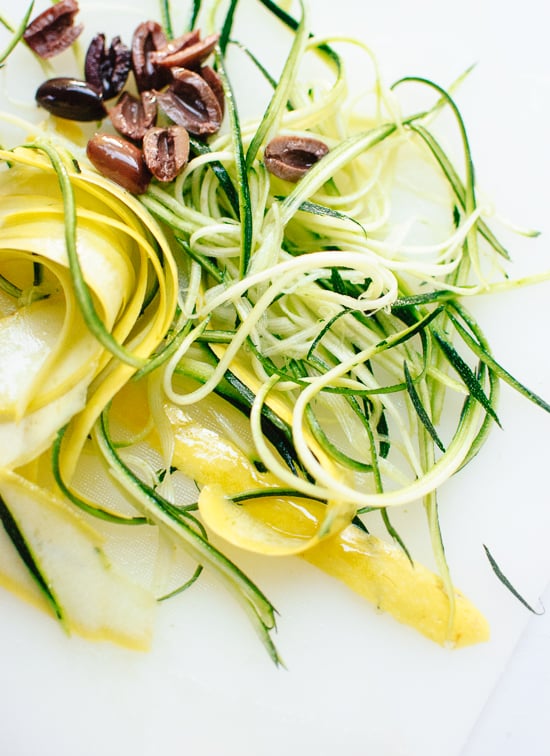 I haven’t experimented much with homemade flours in the past, but Erin’s book makes the process seem totally approachable. Transforming dried chickpeas into chickpea flour took less than a minute in my high-powered Blendtec blender (head’s up: that’s an affiliate link, as are my amazon links). In the book, Erin says that you can also grind chickpeas into flour using a coffee grinder, but I don’t have one of those.

I learned that the milling process is LOUD, but it’s over quickly. I saved a few dollars by doing it myself, so that’s a plus. If you don’t have the proper equipment, you can buy chickpea flour at natural food stores or at Middle Eastern stores (it is also called besan flour, gram flour or garbanzo bean flour).

Bonus: freshly milled flour tastes better, especially when it comes to whole grain flours. Why? The milling process exposes natural oils that are present within the grains, and those natural oils go bad more quickly when they are exposed to air. If your whole wheat flour or whole wheat bread tastes bitter, it’s probably because the oils in the flour have gone rancid. Time to start over with fresh flour. 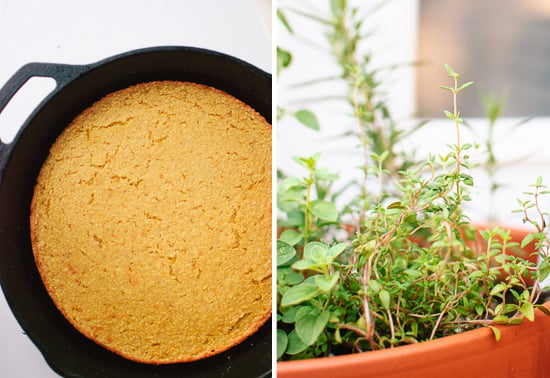 Erin’s recipe for socca pizza turned out beautifully. She presented a margherita pizza in the cookbook, topping her socca with sliced tomatoes, mozzarella and fresh basil. The tomatoes growing in my backyard are still bright green, so I decided to play with the Greek flavors that I typically associate with chickpeas instead. I added creamy feta, Kalamata olives, ribboned summer squash and a light sprinkling of fresh thyme to mine. You can add any pizza toppings you’d like. Let me know how you like yours! 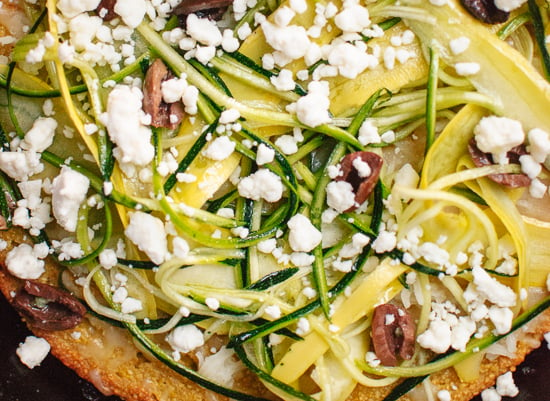 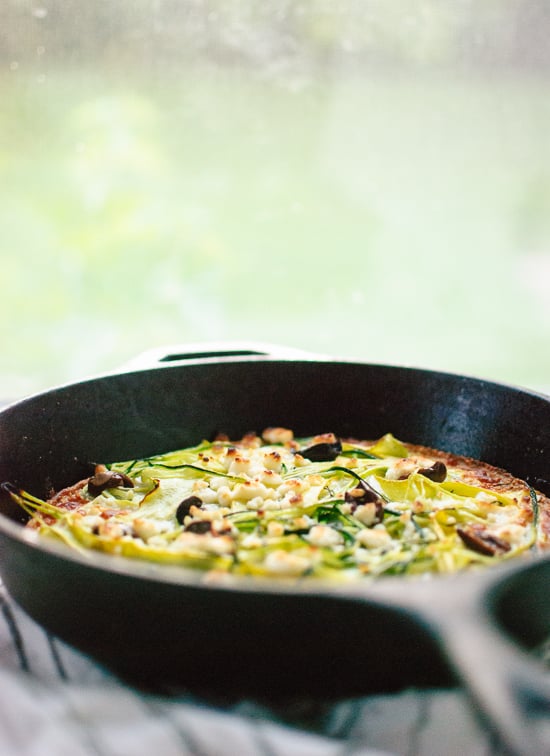 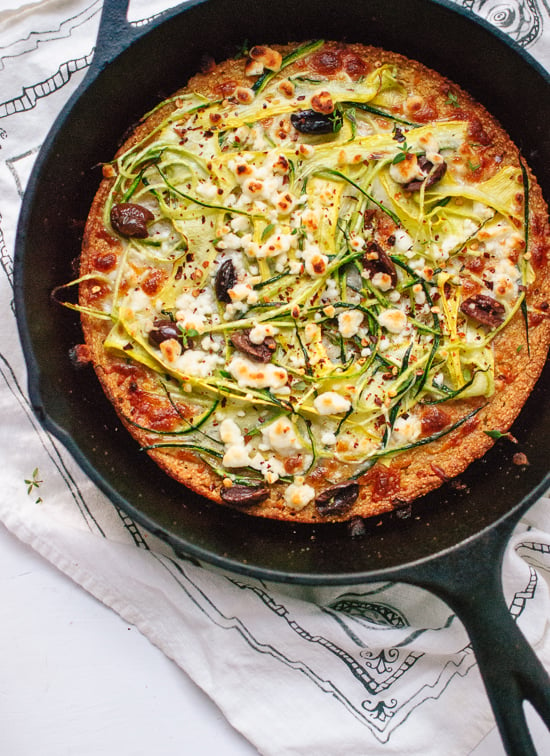 A simple and delicious, gluten-free chickpea crust pizza. I topped mine with summer squash ribbons and other Greek flavors, including feta and fresh thyme. You can add any pizza toppings you’d like! Be sure to allow an hour for the chickpea flour to soak up water. The rest comes together quickly. Recipe as written yields one small (9- to 10-inch) pizza.

Recipe adapted from The Homemade Flour Cookbook by Erin Alderson.

Make it vegan: Skip the cheese for veggie flatbread.
Leftover squash suggestions: Turn leftover squash ribbons into a squash ribbon salad, like this, or just add them to a simple green salad.
Change it up: You can treat the socca pizza crust as though it were any basic pizza crust. Erin made a margherita pizza with her socca crust—she simply topped her pizza crust with sliced tomatoes and shredded mozzarella and sprinkled fresh basil on top once it came out of the oven.
Recommended equipment: a 10-inch cast iron skillet.
If you love this recipe: You’ll also love my other recipes with Greek flavors.

The information shown is an estimate provided by an online nutrition calculator. It should not be considered a substitute for a professional nutritionist’s advice. See our full nutrition disclosure here.